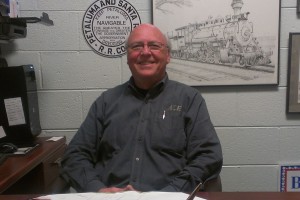 Pini’s is one of Novato’s oldest businesses, serving Novato since 1918, when Henry Pini founded it as a small grocery store. Pini Hardware is one location in Novato that almost everyone knows. Many conversations between Novato friends start with “I ran into (so-and-so) at Pini”. The store has been in several locations starting in Oldtown between Reichert & Sherman Aves & since January 2004 at its current location in the Nave Shopping Center at 1535 South Novato Blvd. In 1968 Ben and Ellarene Young and Tiernan and Florence Saunders purchased the store. Then in 1983 their children, Charles “Chip” Young and Steve Saunders purchased the store from their parents and are the current owners. Everyone knows that the store has an incredible selection of home improvement items. It features a gardening center and a design center for custom cabinetry and more. Pini Hardware, is renowned for its radio-controlled army of eager staffers, who always seem to know what you are looking for. Many staffers past & present participate annually in the Fourth of July Parade on the popular Pini Plunger Brigade.

Chip is a long time supporter of the Novato community. As past president of the Downtown Novato Business Association he helped establish the Downtown Business Improvement District, chaired the Novato Holiday Tree Lighting Committee, is a proud sponsor of Nostalgia Days, created the Pini Kids Zone for safe trick or treat, and was the Easter Bunny at the Spring Celebration egg hunt. Chip was also a member of the Parade Committee for many years. Through his business he supports many youth oriented groups such as Novato’s youth sports teams, Novato’s schools, the Novato Youth Center, & Homeward Bound, and assists a variety of groups with fund raising events.

Have questions? Email Us

How can you support us?

Volunteer to work at the Parade

The parade marches every year thanks to the generous financial and volunteer support of people like you!

Thank You to Our Donors